The secret story of the training base Area 52

Millions of light-years from Earth, through black holes, secret portals, and sinister cosmic nebulae, skulks the planet MRAK. Small and dark, it is invisible on the galaxy maps and no one suspects it as a thread. There, however, the creatures MR-bots and their leader MRS, are lurking. And they have only one mission: invade new and new territories.

Their army can skillfully move through space, but has one huge flaw – strong gravity pinches them down and hinders their movement. That is precisely why, even though their spies are among us for a long long time, they have not been able to invade the Earth.

The 2017 year, Sofia, Bulgaria. A zero gravity earth space has been discovered, codenamed AREA 52. It immediately becomes a hot spot for all who love adrenaline and extreme aerial entertainment. Its whereabouts have been disclosed to MRS quickly and he managed to open an interstellar portal in the heart of the largest trampoline park on the Balkans! MR-bots have their direct connection to the Earth and can begin the long-awaited battle…

But are MRAK’s earth spies completely loyal? And how is the Earth prepared with advanced technology to protect itself from the invaders? Where does the mysterious military leader and air athlete AJ and the brilliant scientist AR come from?

The riddles around AREA 52 are always more than the answers, but more importantly, AJ and AR have assembled a team of free runners with extraordinary skills in the air. They are already preparing new fighters. And they will all stand up against the oncoming attack.

AREA 52 had now become a secret training facility in which free-runners train all future fighters of speed, reaction, imagination, overcoming obstacles. The largest trampoline park in Bulgaria is becoming an academy for future heroes, on whose jumping skills depends on the future of the Earth. At Area 52, the power of the jump is a mighty form of energy that gives supernatural abilities to the people who have mastered it.

The mission of AJ, AR and their squad is to close the interstellar portal with a powerful, invisible shield, that is created and powered in one way only – by jumping!

To become one of the defenders of Earth does not rely on how old you are, how tall you are, how much you weigh and where you come from! You only have to be brave and have a desire to learn and improve your aerial skills!

Today, AREA 52 needs everybody who dares to cross the zone without gravity at the edge of the interstellar threat! 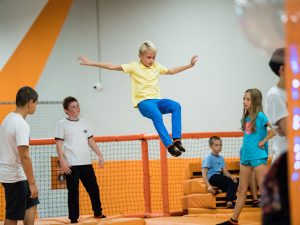 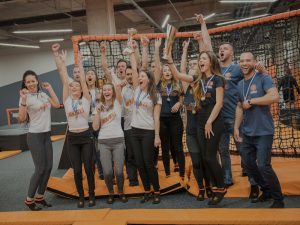 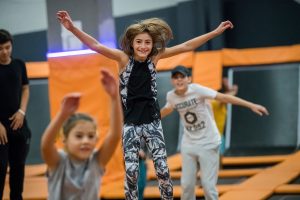 5 games to play on the trampoline